The one-cent coin, The Flying Eagle Penny colloquially called a penny, was the first official U.S. coin ever struck at the United States Mint in Philadelphia in 1793. Those coins bear scant resemblance to the pennies we know because they were larger than the U.S. quarters in circulation today!

It is easy to understand why these coins are generally referred to as “large cents.” Originally, pennies were made of pure Copper, but by the mid-1800s pure Copper coins were prohibitively expensive to produce.

The mint began striking smaller pennies composed of Copper alloyed with another type of metal, such as Silver.

An interesting note: at that time, Gold and Silver were the only metals accepted as official legal tender, so there was a great deal of opposition to the establishment of a penny coin.

Just prior to 1856, Mint Director James Snowden proposed a design for a much smaller penny. After extensive debate, these coins were authorized as legal tender in both the House and the Senate. At the same time, foreign Gold and Silver coins, which most people still utilized as general currency, would no longer be accepted as legal tender in the United States. Flying Eagle Pennies were at last produced in April 1857 and launched into circulation barely a month later. 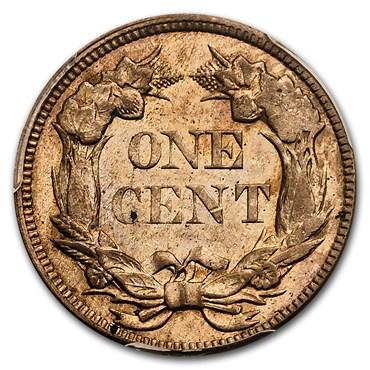 Folklore tells us Gobrecht’s original design was inspired by an eagle named Peter, who was unusually sociable with humans and liked to be fed by U.S. Mint workers throughout the 1830s.

Even though Longacre did not conceive of the design from scratch, it is still widely revered by collectors and coin experts everywhere. Aside from the bold flying eagle on the coin’s obverse, the Flying Eagle Penny is a relatively plain coin.

Accompanying the eagle on the obverse is an inscription of “United States of America” and the mintage year. The coin’s reverse artwork is also simple, featuring the one-cent face value within a pretty, understated wreath.

A reeded texture encircles both faces of the coin, but overall the artwork as well and the design aesthetic are restrained.