Dies with images of Martha Washington and Mount Vernon were first used circa 1965 to strike a group of experimental pieces testing a variety of metal alloys.  Mint officials claim that all of the 1965 experimental pieces were either destroyed or otherwise accounted for.  Until 2000, the only examples known were four sets of Martha Washington “Dimes”, Quarter Dollars”, and “Half Dollars” embedded in Lucite and given to Congress, the Mint Director and the Smithsonian Institution.

A fourth set was mutilated for metallurgical testing.

Beginning in 2000, examples of the Martha Washington “Cent”, “Dime”, ” Quarter Dollar” and “Golden Dollar” began appearing on the market.

In April 10, 2000, Paul Gilkes of Coin Worldreported the discovery of a Martha Washington Dime: “The Martha Washington/Mount Vernon dies were most recently used during metallurgical die trial testing for the Sacagawea dollar”.  Around July 2000, a poorly struck, slightly off-center, uniface Martha Washington “Cent” appeared on the market.

The U.S. Mint conducted metallurgical tests in 1999 on the golden colored manganese-clad planchets which would later be used for the Sacagawea Dollar. 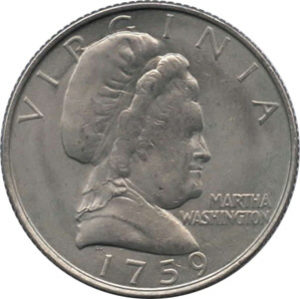 For the first time, the U.S. Mint included representatives from Industry because the new Sacagawea Dollar would have to be completely interchangeable with the existing SBA Dollar. The electromagnetic fingerprint had to be identical. All of the metals combined changed the alloy’s electromagnetic properties. Many tests were conducted including those at IDX Inc., Olin Brass and PMX Industries.

In another Coin World article on July 16th, 2001, James Halsey, President of IDX Inc. was interviewed. IDX Inc. is one of the firms contracted by the U.S. Mint to test prototypes. Mr. Halsey said “numerous samples in different alloys bearing the Martha Washington obverse and Mt. Vernon reverse dies – special designs used for experimental coinage – were shipped to IDX Inc. for testing. Some of the packages were insured for as high as $250,000, with the recipients required to return any and all pieces supplied by the Mint for tests.”

There is one set of a Dime, Quarter and Half struck by Martha Washington dies that are permanently housed in the Smithsonian Institute, embedded in blocks of lucite. According to United States Pattern and Related Issues, by Andrew W. Pollock III, “the only trial pieces purported to have survived metallurgical testing in 1965 were the Dime, Quarter Dollar, and Half Dollar equivalent strikes in copper-nickel clad over copper.”