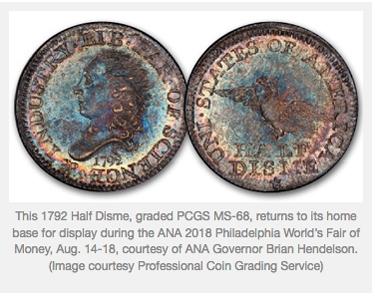 The finest-known surviving example of a Half Disme, the first coins made for circulation by the young United States Mint in 1792, will return to Philadelphia for a “homecoming” display Aug. 14-18 at the 2018 World’s Fair of Money.

It was worth just five cents when it was struck with a hand-operated coining press 226 years ago in a basement across the street from where the first mint building was under construction. It now is insured for $2.5 million by its owner, Brian Hendelson, President of Classic Coin Company of Bridgewater, N.J.

It is known as a Half Disme, an early spelling of the word dime. Only 1,500 were produced in July 1792 using silver supplied by then-Secretary of State Thomas Jefferson. The rainbow-toned example in the upcoming exhibition is graded Mint State 68 (on a 1 to 70 scale) by Professional Coin Grading Service and is the finest known of only several hundred surviving examples of the 1792 Half Dimes.

“Because this year’s World’s Fair of Money is being held in Philadelphia, I thought this would be an excellent opportunity for the general public to see in person this important rare coin that was made in Philadelphia,” said Hendelson.

“The Half Disme was the first denomination produced by the United States for circulation, and this particular, superbly struck and preserved coin could be the first one made. It was exhibited at Mount Vernon, George Washington’s home, in 2014 and 2015,” explained Hendelson.

Hosted by the nonprofit American Numismatic Association, the educational and family-friendly World’s Fair of Money will be held in Hall D of the Pennsylvania Convention Center, 1101 Arch St., Philadelphia, and will be open to the public.

In the narrative text for the upcoming exhibit, ANA Money Museum Curator Doug Mudd wrote: “On July 13, 1792, the first U.S. Mint coins were struck for distribution at the request of President George Washington in a basement close to the site for the new Mint. Legend has it they were struck from Martha Washington’s silverware, but recent research has shown that Thomas Jefferson provided the $75 of silver required to make 1,500 Half Dismes. The coins were distributed by Jefferson to foreign dignitaries, members of the government and others – a calling card for the establishment of the U.S. Mint and an announcement of the new American Republic.”

The coin has remained carefully preserved, first by Rittenhouse and his descendants from 1792 to 1919, and then by subsequent owners. Hendelson acquired it in 2013.

Hendelson is also loaning for the exhibit the April 14, 1792-dated document signed by President George Washington and Secretary of State Jefferson appointing Rittenhouse as the first Director of the United States Mint. Rittenhouse served as the first Mint Director from April 1792 to June 1795.

There will be another valuable rare coin and two additional early mint documents from Hendelson’s collection joining this “homecoming” visit in Philadelphia:

• One of two known 1861 Liberty Head design $20 denomination gold coins with a different “tail’s side” design than the nearly three million others of that denomination made that year at the Philadelphia Mint. Named after Mint Engraver Anthony Paquet, the gold piece is known as the Paquet Reverse.

• The Oct. 28, 1795, document signed by President George Washington and Secretary of State Timothy Pickering appointing Elias Boudinot as the third Director of the United States Mint.

• The Jan. 17, 1806, document signed by President Thomas Jefferson and Secretary of State James Madison appointing Robert Patterson as the fourth Director of the Mint.

Admission to the World’s Fair of Money, Tuesday through Friday (Aug. 14-17), will be $8 for adults and children 12 and older. Admission will be free for everyone on Saturday, Aug. 18.