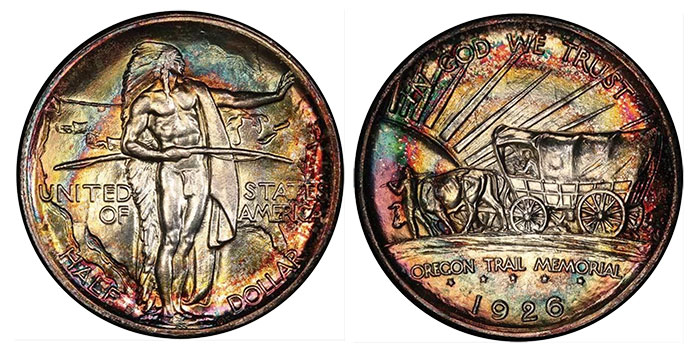 Legend Rare Coin Auctions’ Regency Auction 35 will be held on December 12 at the Cosmopolitan in Las Vegas, Nevada. It will contain a wide array of US coins of all denominations, including multiple top pop pieces and countless registry-quality examples. With estimates ranging from three figures to six, there are pieces here for just about any level of collector.

This piece is a must-see for any collector of high-grade three-cent pieces. The single-finest graded example from NGC or PCGS, this virtually flawless proof displays sharp contrast between the fields and devices and looks as though it could have left the Mint yesterday.

Only 725 proofs were minted in 1866, of which this is the top survivor. It has never sold at public auction as graded, so there is no real comparison for what the hammer price will be. The closest auction records are for multiple pieces graded PR67 Deep Cameo or Ultra Cameo, for which records range from $5,000 to $21,000 USD. The auction record holder sold in 2016 and has substantially less eye appeal than the current piece, even though only one grade separates them. This nickel is vibrantly toned with an iridescent rainbow on both sides. The mirrors are clear, creating a coin that is difficult to match in eye appeal. There are 20 coins with a higher technical grade from NGC and PCGS combined, but the toning on this one is hard to beat.

The 1867 with rays Proof is an interesting issue in and of itself. In that year, the Shield nickel reverse design was changed when the rays proved too difficult to strike. They were removed before the official Proofs were struck. However, a small number of Proofs with rays were struck clandestinely, most likely in multiple batches amounting to somewhere between 25 and 80 coins. Sources disagree on the exact number, but there are 88 graded examples, which is sure to contain duplicates from resubmissions. Regardless, this is a highly rare piece – and even rarer with such strong eye appeal. This stunning piece has already almost tripled the high end of its original estimate, which topped out at $1,250. The vibrant toning suggests that it lived in an old album for much of its life, resulting in bright peripheral toning of crimson, teal, and gold on both sides.

The 1926-S had a high mintage of 83,055, making it a good date for a type set. This gorgeous example is a wonderful representation of the type which is sure to continue to bring strong bidding up through the close of the auction. While not a rare date by any means, this piece is a conditional rarity without a doubt. Tied with two others for finest graded between both PCGS and NGC, this piece is very sharply struck with extremely subtle blue toning.

The 1943-S was usually weakly struck, so much so that Lady Liberty’s left hand is often invisible. On this piece, the outline of her hand and fingers is visible, which is more than can be said for most examples. You will be hard-pressed to find a more fully struck example, and the clean surfaces will fit in with any collection, white or toned. The only noticeable flaws are two small marks in the right field, which are not obtrusive or distracting by any means.

Any serious collector of Proof Morgans is likely to have already seen this piece. Not only the single finest graded 1921 Chapman Proof, but the contrast between the fields and devices is also approaching a cameo effect.

In 1921, two different types of proof Morgans were made at the request of Farran Zerbe and Henry Chapman. The Chapman proofs are the most similar to what we generally consider a Proof to be, with more reflective fields, while the Zerbe Proofs are more akin to a Specimen.

According to records, only 10 to 15 Chapman Proofs were struck, but PCGS has certified 44. Some are certainly resubmissions, but this still suggests a much higher mintage than that recorded. It’s been suggested that perhaps someone else requested a small mintage of Proofs that weren’t recorded but were struck similarly to the Chapman Proofs.

Regardless, the piece currently offered is the single finest graded. It was last sold in November of 2018 for $229,125.

There are plenty of other intriguing lots that demand attention, including an 1870 25 cent Standard Silver pattern and a 1925 thin silver Norse-American medal.

Bidding is now open, and several lots have already far exceeded their original estimates. For example, a 1942 P Type 2 Jefferson nickel in PCGS PR67+ CAC has almost quadrupled its high estimate of $600, and a stunningly toned 1922 Peace dollar in PCGS MS62 CAC has more than tripled its low estimate of $1,000.