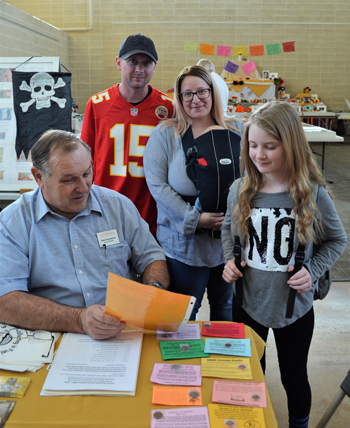 On the coin hobby education side, there were three days of fun-filled, hands-on youth and family activities under the theme, “The Changing Faces of Money,” which included a 10-stop coin treasure hunt. Youth and family outreach activities were handled by American Numismatic Association Past President Walt Ostromecki.

Club newsletter editor Phil Vitale commented, “Our club is 110 percent committed to reaching out to, and sharing the fun coin collecting hobby experience with, others, especially current non-collecting next-generation youngsters and their families. We invited Walt to our show last year and were blown away by what he provided to enhance our kids area show programs. He was the perfect fit. He’s awesome when it comes to sharing his passion for the numismatic hobby with youngsters, families, and non-collectors. And he’s already accepted our invitation to be back for our November 2019 show.”

Club president and bourse chair Bill DeWeese welcomed another first-time ANA official to the show, ANA Chief Judge Joe Boling. Boling was in town to celebrate the Veterans Day holiday weekend with his son stationed at Kirkland Air Force Base. He took the time to share exhibiting tips with club members who set up displays at the show.

“Mr. Boling’s exhibiting insights are sure to enhance the caliber of our exhibitor show displays in the future,” said DeWeese.

Asked about the bourse, DeWeese remarked, “Overall public attendance was around 500, a bit lower than our spring show. Most of the 45 dealers were pleased with sales. The hot items were gold and silver bullion and medium-grade collector type coins. Our two ancient specialty dealers reported better-than-average (results) both buying and selling business, as did our paper money dealers.”

Past bourse chair and club treasurer Rod Frechette took charge of the YN fundraising booth, where donations of books and coin supplies were sold to benefit the club’s youth program. Over a dozen new youth club members were signed up.

ACC show displays were a big hit with the public. Nearly half of the 22 exhibits filling 33 cases were those on exhibition during the recent New Mexico State Fair. Credit for the increase belongs to Chairman Steve Acre. Three Best of Show ribbons went to: Colonial Mexico’s Silver Coinage; Fancy Banknote Backs; and The Silver Story. The club’s special YN Award, “The Bernie,” went to an exhibit of state quarters.

The 2019 ACC coin shows are moving to a larger venue, the Marriott Albuquerque Pyramid North, which will allow for an expanded bourse. The dates for the spring show are April 5-7, 2019. The fall show dates are in the process of being confirmed.

For more information about the upcoming shows and the ACC, visit www.abqcc.org, or email Phil Vitale at philvitale@msn.com.

The ACC meets the last Monday of each month, except December, at the University of New Mexico Continuing Education Building, 1634 University Blvd. N.E., Albuquerque. Trading and socializing begin at 6 p.m. The meeting starts at 7 p.m.