After seven states seceded from the Union, beginning with South Carolina in December 1860, the Confederate States of America was formed with its capital as Montgomery, Alabama. The federal branch mint in New Orleans fell in the hands of the seceded State of Louisiana and the Confederacy. Starting in January 1861, about 5,000 double eagles are said to have been struck at New Orleans along with about 330,000 silver half dollars, both from regular federal dies on hand. At a distance, the Dahlonega Mint in Georgia struck gold dollars from regular dies.

Unknown to historians and others was the Confederacy’s effort at creating its own distinctive coinage. This changed in June 1879, when Ebenezer Locke Mason, Jr., in Mason’s Coin Collectors’ Herald Vol. I, published an article, “History of the recently discovered CONFEDERATE SILVER HALF DOLLAR., Struck by C.S.A., at New Orleans Mint. April, 1861,” which began with this:

It has been believed and recorded as a historical fact that the Southern Confederacy had no metallic currency. After a lapse of 18 years, evidence now presents itself to show that four coins were struck off at the New Orleans Mint while that place was in the possession of the Confederate government. This discovery has been brought about by an article prepared by us for the Philadelphia Public Record, and inserted in that paper January 2nd, under the caption of “A Craze For Coins,” which gave the fancy prices placed upon rare pieces.

A few days subsequently to the publication, we received a communication from B.F. Taylor, M.D., the Secretary and Treasurer of the Louisiana State Board of Health, giving the information that he had a Confederate coin in his possession. In reply, we wrote for a lead pencil rubbing of the piece, at the same time expressing a doubt as to the existence of any genuine coins of the Confederate States. The return mail brought a rubbing of the coin. . .

Information and correspondence from Taylor were published in the article, including this to Marcus Wright:

Dear Sir:—Your favor requesting a statement of the history of the New Orleans Mint, in reference to the coinage under the Confederate Government, is received.

That institution was turned over by the State of Louisiana the last of February, 1861, to the Confederate States of America, the old officers being retained and confirmed by the Government, viz: Wm. A. Elmore, Superintendent; A.J. Guirot, Treasurer; M.F. Bonzano, M.D., Melter and Refiner; and Howard Millspaugh, Assayer,

In the month of April orders were issued by Mr. Memminger, Secretary of the Treasurer, to the effect that designs for the half dollars coins should be submitted to him for approval. 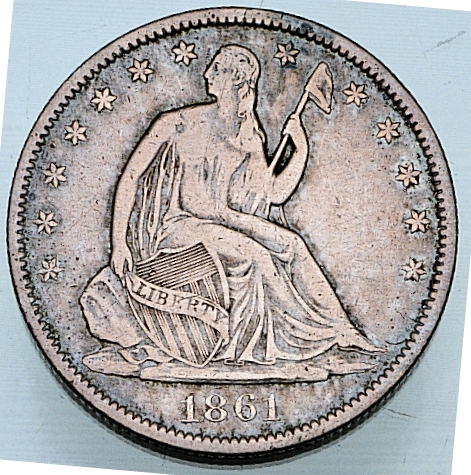 Among several sent, the one approved bore on the obverse of the coin a representation of the Goddess of Liberty, surrounded by thirteen stars, denoting the thirteen States from whence the Confederacy sprung, and on the lower rim the figures 1861. 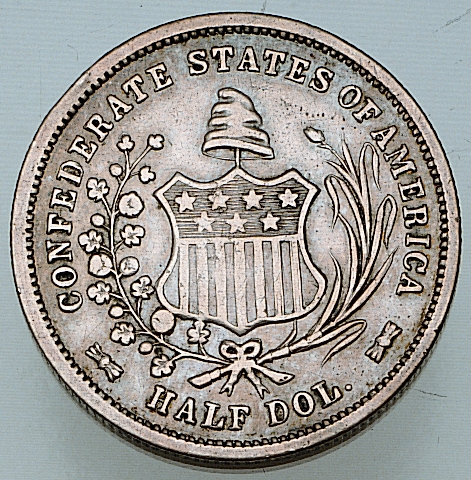 On the reverse there is a shield with seven stars, representing the seceding States; above the shield is a liberty cap, and entwined around it stalks of sugar cane and cotton. The inscription is, “Confederate States of America.” The dies were engraved by A.H.M. Peterson [Patterson], engraver and die striker, who is now living in Commercial Place. They were prepared for the coining press by Conrad Schmidt, foreman of the coining room, (who is still living,) from which four pieces only were struck.

About this period an order came from the Secretary suspending operations on account of the difficulty of obtaining bullion, and the Mint was closed April 30th, 1861.

Of the four pieces mentioned one was sent to the Government, one presented to Prof. Biddle, of the University of Louisiana, one to Dr. E. Ames, of New Orleans, the remaining one being retained by myself. Upon diligent inquiry I am unable to find but one piece besides my own, that being in the possession of a Confederate officer of this city, who transmits it to his son as a souvenir of his father’s services in the Confederate cause.

So soon as copies are made I will take pleasure in sending you a specimen for the archives you represent.

Today in 2018 all four C.S.A. half dollars have been accounted for, each showing wear, likely from use as pocket pieces. They are valued at several hundred thousand dollars each. The John J. Ford, Jr. example is illustrated.

Mason obtained the reverse die and one of the original half dollars. The die was sold to J.W. Scott in the same year, who made restrikes by using the die and stamping the reverses of 1861 half dollars taken from circulation. He announced that 500 pieces would be struck for subscribers. So that he would have something to give the subscribers in case the die broke, in advance he stated that he made 500 store cards in soft white metal. This is highly unlikely as these are very hard to find today—much harder than the restrikes.

To make the restrike half dollars the center of the reverse was ground off to permit a better impression. The resultant coins show a flattened obverse and flattened edges (the reeding was flattened, but is still visible). As the host coins were worn to begin with, having been extracted from circulation, grading of the 1861 Confederate restrike is by the reverse only.

Although Scott soon advertised that he was oversubscribed, sold out, etc., in fact he had sold only a portion of the 500 restrikes made. David U. Proskey, who worked with Scott, stated decades later that Scott had unsold pieces on hand for many years after 1879. However, by the early 20th century, most found buyers, and from that point onward the demand for them and their price increased.

In time, the original half dollar owned by Mason and then Scott became the property of J. Sanford Saltus who gave the coin and reverse die to the American Numismatic Society, New York. Not long thereafter he became the late Mr. Saltus, who literally gave up his life while cleaning coins with potassium cyanide.

Today the restrikes come on the market with frequency and are valued at several thousand dollars each. The grading is by the reverse as the obverse of each is worn.