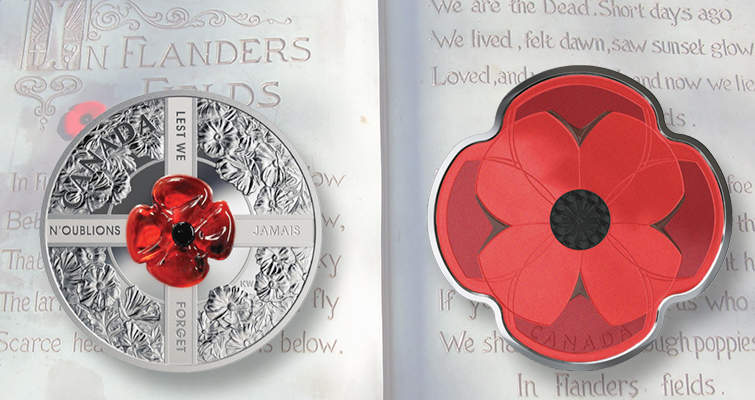 Two new 2019 coins showcase the poppy symbol that has become synonymous with the Nov. 11 celebration, but they break new ground for the Royal Canadian Mint.

The poppy became linked to the Remembrance Day memorials because of the poem “In Flanders Fields” by a Canadian soldier, Lt. Col. John McCrae.

The remembrance poppy is an artificial flower that has been used since 1921. Though originally promoted by a French organization, today, they are mostly used in the United Kingdom, Canada, Australia, United States of America and New Zealand, to commemorate servicemen and women killed in all conflicts.

The $10 coin’s tactile, four-petal contours are unprecedented. In addition, the $10 coin includes applied color “that captures the poppy’s layered and airy feel in a way that has not been seen on previous poppy coins,” according to the RCM.

The Susanna Blunt effigy of Queen Elizabeth II appears on the obverse of both coins.

The reverse of the $10 coin was designed by Jamie Desrochers.

The $20 coin features the Murano poppy at the center of its reverse, with sculpted images of poppies in quadrants around the design, created by Kerri Weller.

“Frostings add depth to the design while emphasizing the beautifully engraved details, like the gentle curl of the poppy petals and foliage,” according to the RCM.