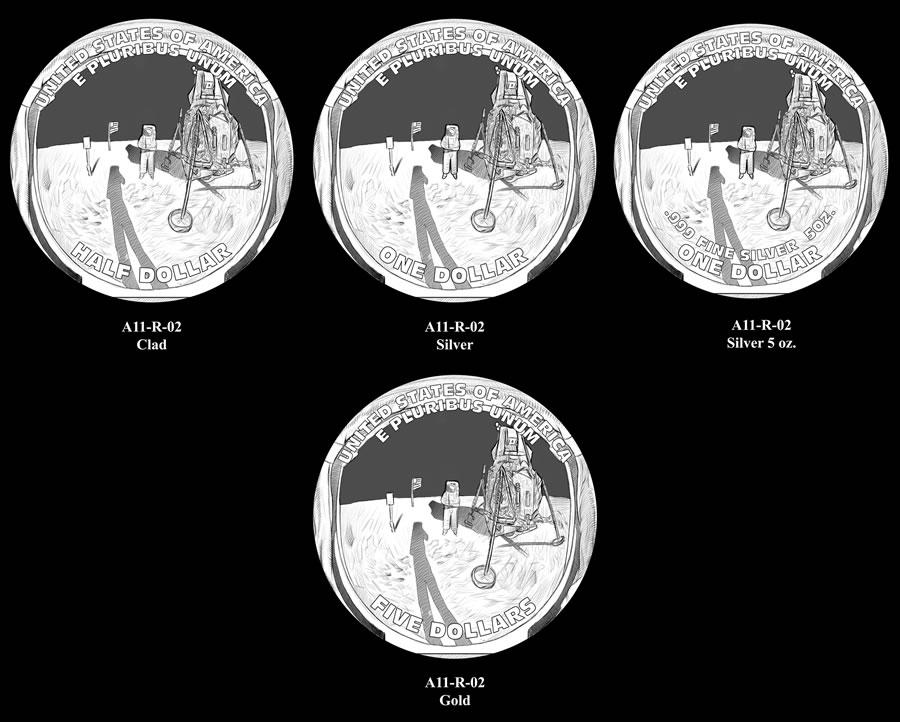 In 2019, the United States Mint will produce and sell curved Apollo 11 Commemorative Coins in recognition of the 50th anniversary of the first manned landing on the moon. 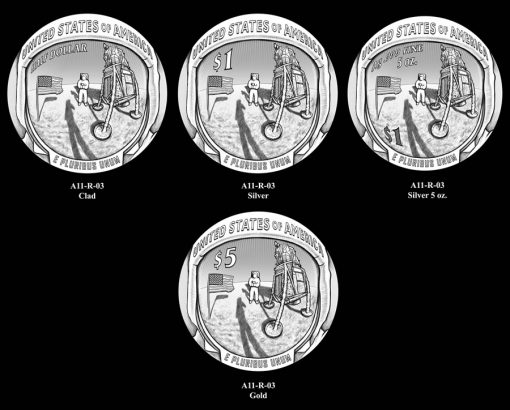 Members of the CFA, CCAC and stakeholders from NASA preferred these sets of reverse designs for the 2019 Apollo 11 50th Anniversary Commemorative Coins. The four coins of the program will be curved, similar to the 2014 National Baseball Hall of Fame Baseball Coins, so that their reverses are convex to more closely resemble the visor of Buzz Aldrin’s helmet as seen in a photo taken on the moon in 1969.

A design competition will decide the coins’ obverse design. As for the reverses, artists for the U.S. Mint created three sets of designs for consideration. All of them are similar since the law authorizing the coins calls for a representation of the 1969 “Buzz Aldrin on the Moon” photograph that shows just the visor and part of the helmet.

The submitted candidate designs include elements like the American flag, the lunar lander, a solar wind collector, and astronaut Neil Armstrong — all of which are reflected in Aldrin’s mirrored visor from the famous photo. The artwork was reviewed by the Commission of Fine Arts (CFA) on June 15 and by the Citizens Coinage Advisory Committee (CCAC) on June 21. Stakeholders from NASA also actively participated throughout the process. The third set of designs, shown topmost, won the most support.

CCAC did suggest changes to them that include spelling out the name of the denominations and, for the 5-ounce piece, placing its weight and fineness on the edge. The U.S. Mint actually has the option to exclude the weight and fineness completely as they are not required by law. The CFA also recommended spelling out the denominations for all four coins. In addition, they wanted verification from NASA on the perspective of the lunar lander.

The authorizing law for the four commemorates does communicate a desire, “to the extent possible,” for the designs to flow over the edge of the coins. A U.S. Mint official said that they were “looking at that right now.”

In related news, the CCAC and CFA selected members to jury the competition for the coins’ obverse design. Edward D. Dunson, Jr., Liza Gilbert, and Frederick J. Lindstrom will represent the CFA. Jury members from the CCAC include Erick Jansen, Thomas J. Uram, and Jeanne Stevens-Sollman.

Image of the first and second sets of designs follow. 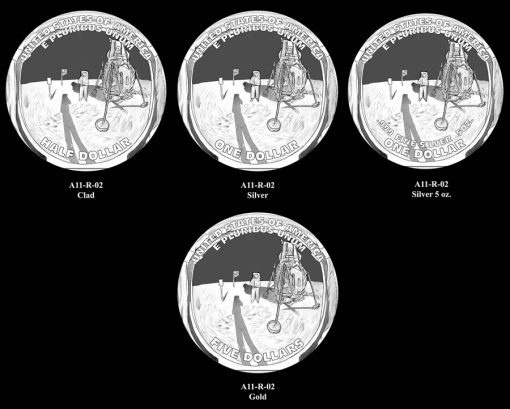 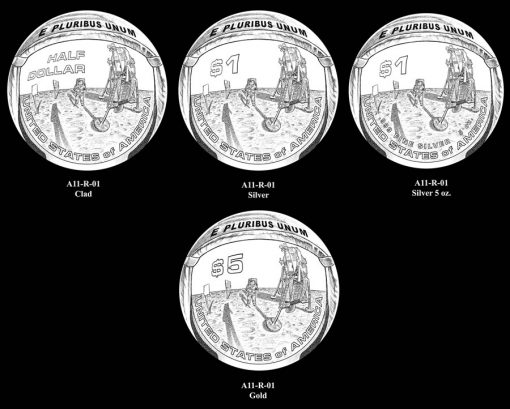