Kazan Federal University, Joint Institute for Nuclear Research (Dubna, Russia), and Khalikov Institute of Archeology (Tatarstan Academy of Sciences, Kazan, Russia) are working together to study the physical properties of the coins found on the territory of former Volga Bulgaria. 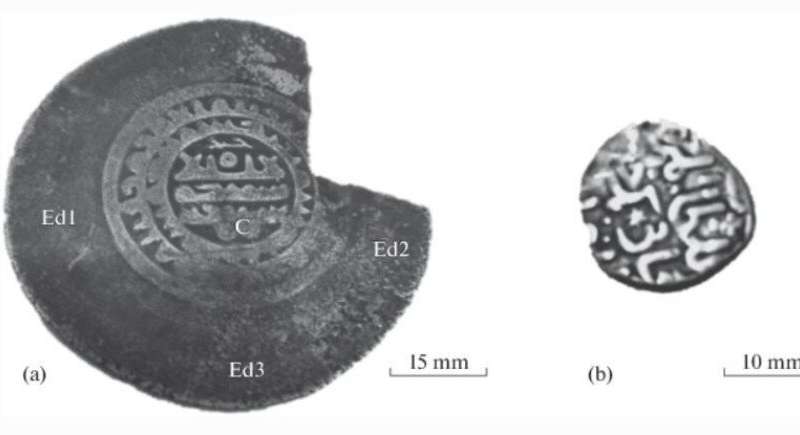 This medieval state occupied a convenient position on the Volga river amidst continental trade routes. Volga Bulgaria had a developed economy and extensive trade relations with neighboring regions. Thus, the local coinage was developed, and coins minted in other regions were in wide circulation as well. A large number of numismatic finds at the excavation sites of cities and settlements confirms this. The coins found contain valuable historical information. The chemical composition of the coins can provide important information about the silver ore deposits from which the coins are made, matching a specific historical period and identifying fakes. The internal structure of coins can give new info on the technical aspects of coin minting, such as metal cooling rate, minting methods, and surface silvering.

“We determine the chemical composition of the coins, as well as their internal structure: the presence of coatings, layers, and other compositional heterogeneities,” explains co-author Bulat Bakirov. “To do this, we use the methods of neutron diffraction and neutron tomography. Neutron methods are completely non-destructive and have a number of unique features; therefore, they can be used to study especially rare and valuable archaeological artifacts.”

Studies of silver coins by modern scientific methods are very beneficial. Firstly, this provides a better understanding of the structure and historical stages of the economic and technical development of medieval Volga Bulgaria. Secondly, there is the possibility of reconstructing medieval technologies, which is of great importance both for historical science and for educational purposes. Thirdly, such studies are useful for the development of the methodology of restoration and preservation of archaeological finds.

In this particular paper, a 10th century Samanid multidirham and a 14th century Bulat-Timur dirham were thoroughly investigated. It was established that both studied coins consist of a copper-silver alloy. However, the Samanid multidirham is characterized by a very high copper content—on average, about 50% of the entire volume of the coin material. The spatial distribution of silver and copper in this coin is uneven, which can be associated with both the peculiarities of the initial ore and with the processes that occur during its coining. No outcrops of a high silver concentration on the coin surface, which are characteristic of the liquation processes, were revealed. In contrast to the multidirham, the Bulat-Timur dirham consists almost completely of silver. The volume content of copper in this coin is extremely low—5.2%. The data on this coin composition are in good agreement with the results of investigations of the Golden Horde coins of that epoch

In the near future, the team plans to expand the range of studied samples. Of great interest are other products from ferrous and non-ferrous metals, in particular, ingots and blacksmithing waste. Such studies will significantly increase the knowledge of metallurgy in this historical region.