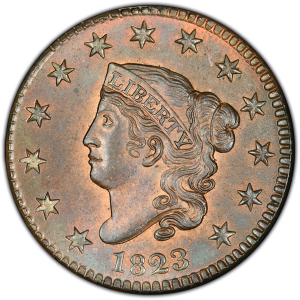 Ron Guth: 1816 is the first year of what is known as the Middle Dates in the large cent series, encompassing the period from 1816 to 1839. Researcher Howard Newcomb published an extensive analysis of the cents from this period, listing all of the dies and varieties (die combinations) known to him. Similarly, a dedicated cadre of collectors focus all of their attention on obtaining as many of the existing die varieties as possible. One of the attractions of this series is that there are no mega-rarities that prevent a person of average means from completing a date set. However, there are individual die varieties (such as the proof-only Newcomb 7 of 1834) that are extremely rare and expensive. 1816 is a common date that is popular as the first year of issue. 1817 offers an interesting variety with 15 stars on the obverse (instead of the usual 13). The first overdate appears in 1819 (1819/8) along with Small and Large Date varieties.

Most dates can be found in nice condition. Some dates, such as 1817 and 1820, were represented in hoards, making them a little easier to locate in top grades. Complete date sets of this series can be assembled with relative ease, particularly in circulated condition.