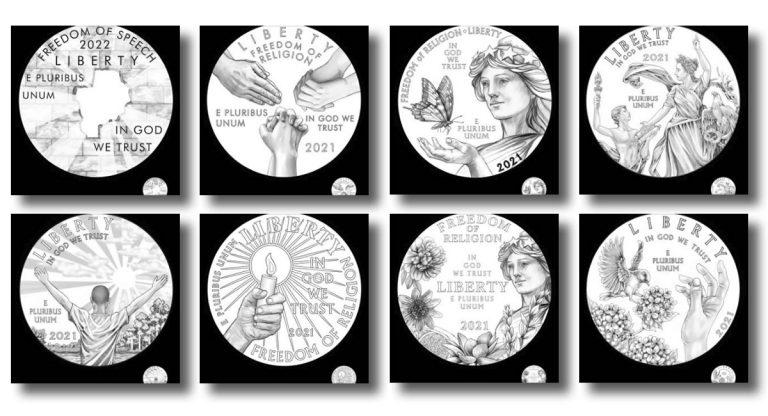 The annual collector series of .9995 fine platinum coins was introduced in 1997 and has featured several design themes such as “Vistas of Liberty,” “Foundations of Democracy,” and “Preamble to the Constitution.” The current design series, which started this year and ends in 2020, celebrates “Life, Liberty and the Pursuit of Happiness.” (See photos of the most recent 2018 “Life” coin.)

Proof Platinum Eagles in years 2021 to 2025 will depict obverse designs emblematic of the five freedoms enumerated in the First Amendment to the United States Constitution — the freedom of religion, freedom of speech, freedom of the press, freedom to peaceably assemble, and freedom to petition the government for a redress of grievances.

Their reverses will bear the same American eagle design shown on 2018 to 2020 platinum proof coins.

Two portfolios of concept designs were unveiled for the 2021-2025 coins.

One portfolio included sets of designs created in concert with one another across the five-coin series. Specifically, artists developed submissions for the first three years in the series — for 2021 (Freedom of Religion), 2022 (Freedom of Speech), and 2023 (Freedom of the Press). They were given the option to submit rough sketches or a description of how they would depict the remaining two designs (those being 2024’s Freedom of Assembly and 2025’s Freedom to Petition).

The other portfolio contained designs for just the first year’s issue, the 2021’s Freedom of Religion. These designs came from artists focusing on the singular year’s theme without the constraint of conceiving design for the other four coins in the series.

The portfolio of obverse designs singularly focused on 2021 (Freedom of Religion) follows:

AEP-01 takes its inspiration from Moses Jacob Ezekiel’s “Religious Liberty” statue in Philadelphia. Centrally featured is a depiction of Freedom pointing upward declaring religious liberty. The young man, holding the burning torch of religion, represents the genius of faith. The scroll represents the power of the Constitution and the eagle clutching a serpent represents vanquishing tyranny through democracy.

AEP-02 depicts Liberty watching as a butterfly, symbolizing the freedom of religion, lands on her hand. The butterfly is used symbolically in many religions because of its transformation from a caterpillar — representing the soul, reincarnation, resurrection, and femininity. The inscription “FREEDOM OF RELIGION” is included.

AEP-03 and AEP-04 feature gleaming candles because light and fire are an ancient and central symbol in many religions. Candles are common to temples and shrines and additionally figure prominently in rituals. The inscription “FREEDOM OF RELIGION” is included.

AEP-05 and AEP-06 depict a man with his arms wide open, his stance representing a declaration of faith. The trees on the horizon represent the growing establishment of different religions.

AEP-07 depicts a stylized image of a heart on fire that is framed within a silhouette of the Liberty Bell. The Liberty Bell represents freedom and is the backdrop and foundation for the right of American citizens to practice any religion. The inscription “FREEDOM OF RELIGION” is included.

AEP-08 places the text of the First Amendment in a spiral form. The spiral is one of the oldest symbols and is embraced by and featured in many cultures and religious traditions around the world. It generally becomes an icon for nature, cosmic wisdom, and a universe in constant motion. This theme of motion is emphasized by the italic text leading inward and the need to turn the coin in your hand to read the text.

AEP-09 centrally features a hand symbolizing a proclamation that this nation cherishes and protects the legacy of religious liberty. The bluebird embodies the arrival of spring emblematic of new beginnings. The lilac represents purity, spirituality, and eternal love.

AEP-10 illustrates a harmonious grouping of various attitudes of prayer, spiritual petition, and thanksgiving. These religious freedoms are protected by the First Amendment, and gives us the option of choosing which spiritual path we decide to follow. The inscription “FREEDOM OF RELIGION” is included.

AEP-11 depicts a traditional figure of Liberty and floral symbols of various world religions. The inscription “FREEDOM OF RELIGION” is included.

AEP-12 showcases a butterfly, symbolizing the freedom of religion, and a purple coneflower. The butterfly is used symbolically in many religions because of its transformation from a caterpillar, representing the soul, reincarnation, resurrection, and femininity. The inscription “FREEDOM OF RELIGION” is included.

AEP-13 draws inspiration from Moses Jacob Ezekiel’s “Religious Liberty” statue in Philadelphia. The design features a depiction of Lady Liberty and, on her right, the young man as the genius of faith holding the burning torch of religion. The laurel and scroll represent the power of the Constitution. The eagle clutching a serpent represents vanquishing tyranny through democracy.

AEP-14 depicts three pairs of hands in various gestures of prayer set against the United States flag. The inscription “FREEDOM OF RELIGION” is included.

AEP-15 features three sets of hands, coming from three different directions, clasped in prayer represent different directions from which people may come, united by their freedom of religion. In this design, the most universal expression of religion is illustrated – that of prayer. The inscription “FREEDOM OF RELIGION” is included.

AEP22-01 depicts the idea that speech is the expression of thought that can change the world. In this design a solid brick wall is being penetrated by the illumination of that thought. The inscription “FREEDOM OF SPEECH” is included.

AEP23-01 depicts a figure utilizing an antique book press. The inscription “FREEDOM OF THE PRESS” is included.