Skip to content
Collectible / Rare Bills Paper Money Silver Certificates
January 7, 2020 KMFranck 2 Comments bill searching, Blue Seal, Kyle Franck, Silver Certificate, Variety Errors
Let’s talk about the common ones first.  Any silver certificate from 1957 or 1935 is extremely common.  That also goes for any combination of letters like 1957B or 1935F.  They are all worth around $1.50 in circulated condition and about $5 in perfect condition.  These can be bought by the 100s at shows or coin shops.  They are no where near rare enough to be collectible.  The small premium they do command is just a result of the curiosity factor.

Any 1934 and any 1953 $5 silver certificate with a blue seal is very common.  I sell them for $7 in circulated condition.  There are some rare star notes from those years.  The 1953B star and some 1934 stars are rare.  The star symbol would be located at the beginning of the serial number.  If a letter begins and ends the serial number, then that is considered a regular issue.

The ten dollar bill is the only other small size denomination printed as a silver certificate.  Tens were printed for 1933, 1934, and 1953.  The 1933 example is by far the rarest.  The other years typically sell for around $15 in circulated condition.  Once again, star notes and low serial numbers have a chance to be more valuable.  A low serial number on a silver certificate is typically defined as being under 100.

1891, 1896, and 1899 silver certificates were printed in large numbers.  For the most part, 1891 notes look similar to earlier issues.  However, the 1896 and 1899 types are distinctive.  The 1896 series is famously known as the educational series.  The 1899 line of silver certificates present opportunities to own a black eagle, mini-porthole, or a chief.

Oddly enough, the 20th century saw the issuance of large size silver certificates in just two years, 1908 and 1923.  The 1908 example is a fairly tough $10 note.  One and five dollar bills were printed for 1923.  The $1 bill is exceptionally common and worth around $15 on average.  The $5 bill from 1923 is fairly tough, and usually worth at least a few hundred dollars.

Serial numbers, miscuts, and errors of all kinds can make their way into your pocket or wallet. These can be worth hundreds of dollars to thousands of dollars!
Comment or email us any questions or suggestions for videos on coins, bills and other banknotes, precious metals and more! 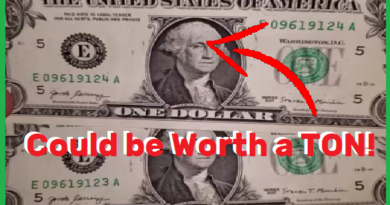 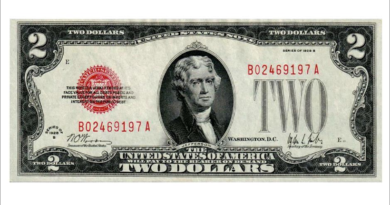 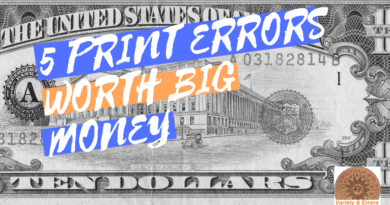 5 PRINT ERRORS WORTH BIG MONEY FOUND RIGHT IN YOUR POCKET

2 thoughts on “ADD IT TO THE COLLECTION! $1 Blue Seal Silver Certificate”