By the time the $20 bill honors Harriet Tubman, cash may be something of a rarity. The Treasury Department’s recent announcement that Tubman and other women will grace $20, $10, and $5 bills starting in 2020, is a long overdue tribute to some of the country’s greatest civil rights heroes and suffrage activists. But the move raises a familiar question: Should we have paper currency at all?

The case against cash isn’t new—and while coins and paper notes are still integral in the U.S., they account for a minority of all transactions and just 14% by value. At the same time, the idea of a completely cashless economy is growing in popularity as research confirms the drawbacks of paper currency and technology provides a safer way forward. The argument is simple: Cash is an untraceable means of exchange that enables (and encourages) a vast criminal economy.

“For individuals and organizations conducting illicit activities, cash is undoubtedly the preferred payment mechanism,” notes Peter Sands, Harvard president emeritus and a senior fellow at the university’s Kennedy School of Government, in a recent paper. “No other payment mechanism simultaneously provides anonymity for payor and payee, leaves no trace of transactions, and is so widely accepted.”

Without paper money, the criminal class would have to use banks, greatly increasing their chance of detection, or use a vastly more troublesome means of exchange. The increased oversight raises privacy concerns for law-abiding citizens, but experts point to a big societal payoff.

“You’ve seen pictures of these gigantic bales of money international drug dealers are found with,” says Richard Wright, chair of the justice and criminology department at Georgia State University. Without cash, “what are you going to trade for drugs? Start trading 747s? Sure, you can transmit funds electronically, but that’s much riskier because it’s much more traceable.”

Calling for the elimination of cash is no longer the truly radical position it once was, and the need to eliminate of the most dangerous types of bills is becoming conventional wisdom. Sands’s paper argues that abolishing high denomination bills, such as the $100 bill and €500 note, would impose a sizable cost on criminals trafficking large amounts of money by making transportation much more difficult. Crooks can easily tote $1 million in $100 bills in a single briefcase, for instance; the cash weighs just 22 lbs. But in $20 bills, that same $1 million would weigh 110 lbs. and fill four briefcases—too much for one courier to handle.

Former Treasury Secretary (and fellow Harvard scholar) Larry Summers endorsed Sands’s conclusions in a recent article for the Washington Post, although he stopped short of calling for an end to paper money entirely, and the Financial Times reported in February that the European Central bank will gradually withdraw the €500 note from circulation.

Getting rid of cash isn’t just about disrupting major organized crime. It’s also about limiting day-to-day street violence. Professor Wright and his colleagues studied crime statistics in Missouri during its mid-1990s transition from distributing federal welfare benefits via a cashable check to a preloaded debit card. After comparing areas that transitioned to debit cards with those that still provided cash benefits, they found moving away from cash was associated with a roughly 10% drop in the total crime rate.

Wright says criminals generally commit burglaries, larcenies, and theft-related assaults in order to get their hands on money they can use in the illegal economy. “You can’t buy drugs with a debit card,” the professor explains. In other words, crime declined because there was less of what thieves wanted to steal. The evidence for cash’s role in crime is strong enough that Wright supports getting rid of paper money wholesale—assuming there can be safeguards to allow transactions in the event of a major internet outage. “Getting rid of cash won’t stop all of this [crime] but it will slow it significantly,” he says.

Harvard economics professor Kenneth Rogoff also supports eliminating cash, not just to thwart underground economies, but also to help improve economic policy. Central banks typically fight recessions by lowering interest rates, which stimulates the economy by making saving less lucrative and encouraging consumers and businesses to spend. However, if interest rates dip below zero, meaning banks effectively charge savers, customers can simply withdraw their cash and sidestep the policy entirely. This effect is known as the “zero lower bound,” and is considered a serious limit to the effectiveness of monetary policy. “There are certainly many ways to skirt the zero lower bound, but the most elegant would be getting rid of most cash,” Rogoff says.

If cash is so bad, why do we keep it around? Some see the anonymity it provides as a check on government power and the financial industry. The Atlantic‘s Conor Friedersdoft writes that “An end to cash would mean that every financial transaction is exposed to a third party,” making everyone’s spending history searchable by authorities and available to banks and other industries that might not have our best interests in mind. Bitcoin, an electronic substitute for cash, has emerged to meet this need for anonymity in a digital age, although it carries nearly all of cash’s downsides—such as attractiveness to criminals—multiplied by the cryptocurrency’s ability to be transmitted electronically.

The question is whether privacy concerns outweigh the many benefits of a cashless society. At least for now, calls to eliminate cash entirely remain on the fringes. That said, it’s difficult not to see the anti-cash momentum growing. Sweden, Denmark, and Norway are gradually moving away from cash—even panhandlers in Sweden accept credit cards. As Wright says, you don’t need a study to tell you cash has fallen out of favor. “You really only have to look around… My wife went to the post office to buy a stamp,” the professor recalls. “She had a $20 bill, and the woman looked back at her and said ‘don’t you have a credit card’?” 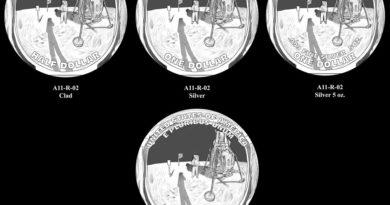 Possibly the First US Coin Ever Minted

One thought on “Getting Rid of Paper Money”