Wartime Jefferson Nickels were released by the United States Mint during the years of 1942-1945. Each has a composition of 56% copper, 9% manganese and 35% silver for a total silver weight of 0.05626 ounces. (Look to the right column to calculate coin melt values based on the latest price of the precious metal.)

The creation of wartime Jefferson Nickels was owed entirely to shortages of the metal nickel during World War II. The silvery-white metal was required for the production of armor plating being manufactured in great amounts for use on military equipment.

Previous to the release of silver nickels during the war, five cent pieces of the United States were struck from a composition of 75% copper and 25% nickel. In fact, it was owed to another war, the American Civil War, that five-cent coins were first composed from the metal nickel and came to be known by that same name.

The composition of nickels remained the same from that 1866 introduction until 1942. At that point, a substitute for the nickel metal had to be found as it was in dire need for the war effort. By Congressional order, the United States Mint started exploring alternatives and found that a return to the use of silver would result in coins with basically the same weight and electrical resistance as the pre-war releases. Thus, the United States Mint started producing nickels in 1942 from a 35% silver composition.

These new coins would be differentiated from their non-precious metal predecessors by the inclusion of a large mintmark on the reverse. The location and size of the mintmark would make them easier to identify for eventual removal from circulation after the war by the government, a process which never really materialized.

Other than the placement and size of the mintmark, remaining design elements were unchanged. This includes an obverse portrait of Thomas Jefferson, the third President of the United States. The reverse showed an image of Monticello, Jefferson’s home. Both were added to the five-cent coin in 1938 and were designed by artist Felix Schlag.

Following World War II, five-cent coins returned to their previous cupro-nickel content. However, it should be noted that there is evidence that some 1942 and 1943 five-cent coins were also struck from a cupro-nickel composition rather than the standard 35% silver of those years. As well, some 1946 silver examples are known to exist despite the fact that the standard had returned to its non-precious metal composition.

Wartime silver Jefferson Nickels are desirable for both their numismatic as well as their precious metal content. As relatively old and somewhat rare strikes, collectors are typically willing to pay a premium for the coins, especially if they are in fair to good condition. Those that are in poor condition are also sought after as junk silver coins for the 0.05626 ounces of the precious metal in each. 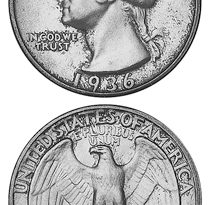 Washington Quarters – The NEED TO KNOW