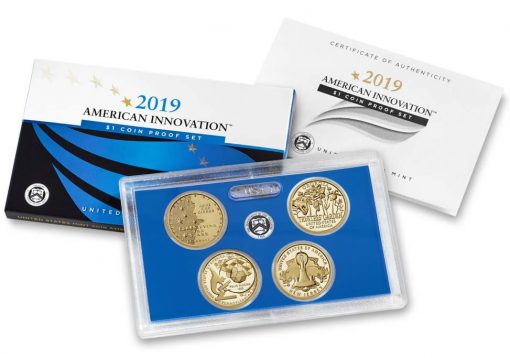 Found within the set are four proof quality dollars honoring American innovation and pioneering from Delaware, Pennsylvania, New Jersey, and Georgia. Proof coins are the U.S. Mint’s highest quality finish, featuring sharp reliefs and frosted foregrounds against mirror-like backgrounds. Those for the set are also produced at the Mint’s facility in San Francisco and carry an ‘S’ mint mark whereas coins for circulation come from the Denver or Philadelphia Mints.

In a quick overview, the American Innovation series debuted last year with one $1 coin design. It served as an introduction to the program which will offer four different reverse (tails) designs every year from 2019 through 2032. 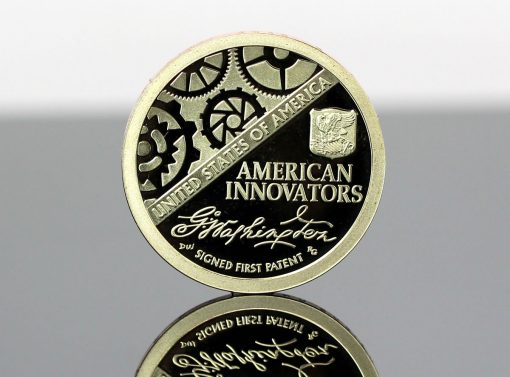 Series coins will showcase a reverse emblematic of a significant innovation, an innovator or group of innovators from each of the 50 states, District of Columbia, and U.S. territories.

As for their order of release, the authorizing law mandates that they shall follow a timeline of when each state ratified the Constitution of the United States or was admitted to the Union. Following that, the coins shall honor the District of Columbia, the Commonwealth of Puerto Rico, Guam, American Samoa, the United States Virgin Islands, and the Commonwealth of the Northern Mariana Islands. 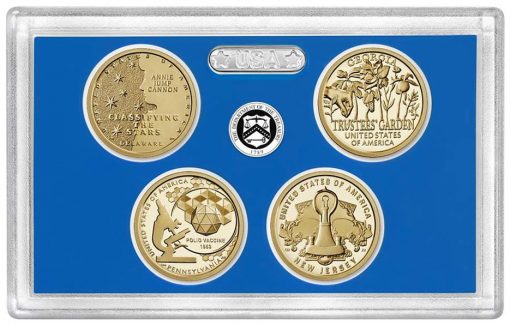 Designed by Justin Kunz and sculpted by Phebe Hemphill, all series coins share a common obverse (heads side) depicting a representation of the Statue of Liberty, a privy mark of a stylized gear, and inscriptions “IN GOD WE TRUST” and “$1.”

Dollar coins also share edges that are incused with their year of issue, a mint mark, and “E PLURIBUS UNUM.”

The 2019 American Innovation $1 Coin Proof Set is available directly from the U.S. Mint via its online store for American Innovation products, or by calling 1-800-USA-MINT (872-6468). Hearing- and speech-impaired customers with TTY equipment may order at 1-888-321-MINT.

All four coins ship together in a protective lens and are accompanied by a Certificate of Authenticity.