The frilled neck lizard is the third subject of the annual Wildlife Up Close program of silver coins for Niue.

This predatory lizard can measure up to 3 feet in length, and exhibits its trademark behavior in such dramatic fashion that it is well known both within and outside of Australia.

When threatened, this dragon-like lizard produces a startling display: it gapes its mouth, exposing a bright pink or yellow lining; its neck frill spreads out, displaying bright orange and red scales; and it raises its body, sometimes holding its tail above its body. This enlarging display is seen as a reaction to intimidate and discourage predators, for claiming territory, and during courtship. 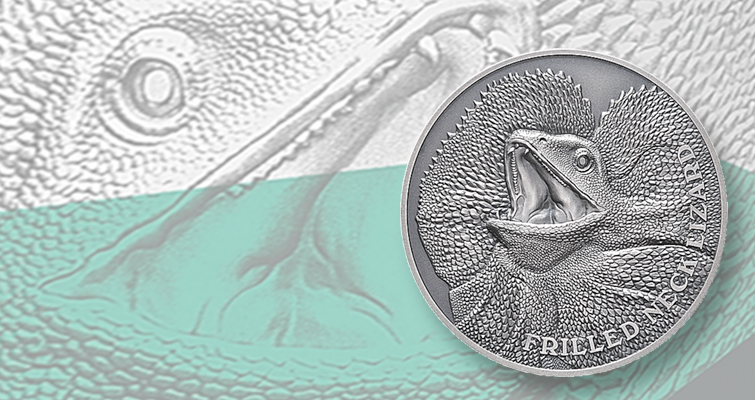 The frilled necked lizard (Chlamydosaurus kingii) is so called because the large ruff of skin usually lies folded back against its head and neck. The neck frill is supported by long spines of cartilage that are connected to the jaw bones. When the lizard is frightened and its mouth gapes, the frill flares out.

The lizard is a member of the agamid (dragons) family, which means it is a relatively large lizard. Incredibly, the frill neck lizard is also capable of bipedal locomotion, running on its hind legs.

Like many lizards, frill-necked lizards are largely insectivorous, feeding on cicadas, beetles, and termites. They especially favor butterflies and moths, and even more so their larvae. Though insects are their primary source of food, they also consume spiders, other lizards, and small mammals. Like most members of the agamid family, frill-necked lizards employ an ambush method of hunting, lying in wait for prey.

When the lizards eat, they eat in abundance. These binge periods usually occur during the wet season, when the lizards will ingest hundreds to thousands of alates (ants or termites) in a single meal.

The obverse of the coin carries the Ian Rank-Broadley effigy of Queen Elizabeth II. Inscriptions identify the weight and fineness of silver.

The reverse shows a close up portrait of the intimidating frilled neck lizard baring its teeth and exhibiting its frill.

The coin is encapsulated inside a lacquered clamshell-style presentation case, lined with black velvet and satin, and protected by a full-color outer cardboard box. An individually numbered certificate of authenticity is included.

A 1-ounce gold $150 version was also issued, with a mintage limit of 150 pieces. The coin was expected to sell out.

American-based coin firm Talisman Coins is the distributor for the issue.

The silver coins are available individually for $109.95, with quantity discounts available.