Almost every coin collector has experienced the thrill of finding something collectible in change. Whether the find is a silver dime or quarter dollar or a Wheat cent, observant collectors are rewarded for their knowledge with the occasional little treasure from an everyday transaction.

Yet, 55 years after the removal of silver from circulating coinage and decades of massive mintages of all circulating denominations, the ability to assemble entire fun sets of classic U.S. coins has become almost only a memory.

Rob Oberth and Roundtable Trading are trying to change that. During the Great American Coin Hunt, or GACH, a program conceived as a way to draw public interest to numismatics, participating dealers will voluntarily release numismatically significant items from their own stocks into circulation. Beginning during the American Numismatic Association’s National Coin Week, April 21 to 27, the dealers will put 1 million collectible coins into circulation.

Most people encounter circulating coinage everyday, and their ubiquity provides access to the largest conceivable market. The U.S. Mint, at the direction of Congress, has attempted to make America’s pocket change distinctive and educational through circulating commemorative coin programs such as the 50 States commemorative quarter dollars and the Westward Journey 5-cent coins. The GACH seeks to generate interest in coin collecting by releasing items that can both educate the uninitiated and provide things to look for in circulation for more knowledgeable people.

Between 250 and 300 dealers have agreed to deliberately release thousands of pieces from their own U.S. inventory into circulation at restaurants, retail and convenience stores, and in higher-traffic area such as airports, train stations, malls, and town squares according to Rob Oberth, one of the program’s organizers, who himself as pledged to spend 5,000 collectible coins.

The purpose of the Great American Coin Hunt is to “get people who are not interested in numismatics to be interested in numismatics,” according to Oberth. The hunt is the product of conversations among Roundtable members and others in dealer and collector networks, particularly in Coin Dealers Helping Coin Dealers, Roundtable’s Facebook forum. For the past year, members have brainstormed ways to broaden the appeal of numismatics, as a response to the demographic challenges facing the hobby.

The practice of intentionally circulating rare collectible coins is not unique to the Great American Coin Hunt. Many individual dealers give away Indian Head 5-cent coins, Lincoln, Wheat cents, and other common but collectible coins  in change when customers pay cash, or use similar coins at many different kinds of businesses as a way of keeping numismatic items in circulation. The Great American Coin Hunt represents the largest-scale example of such efforts yet undertaken.

Different dealers have pledged different amounts, ranging from a few hundred to, in the case of dealer and former ANA president Jeff Garrett, 25,000. The average planned release, according to Oberth, is around 2,000 coins.

In addition to common collectible coins, some dealers will be using key dates as tips at restaurants (of course mentioning to the staff that their tip is worth more than a few cents) and placing hologram stickers on some of the common cons they put into circulation. These hologram coins will include instructions for the lucky recipient to find a participating dealer and exchange the coin for a key date of the dealer’s choice worth up to $100. Some dealers will include free cardboard albums with the coins, to nudge the lucky new owner toward working on a set, and perhaps a collection.

The Great American Coin Hunt is being advertised heavily by dealers within and outside of Roundtable, and the hashtag #GreatAmericanCoinShow has already been used widely; the Facebook campaign has been viewed by more than 10,000 people. Ads are being taken out in all major numismatic publications such as CoinWeek and Coin World, and according to Oberth, the organizers of the Great American Coin Hunt are trying to get the ANA also involved in the campaign. 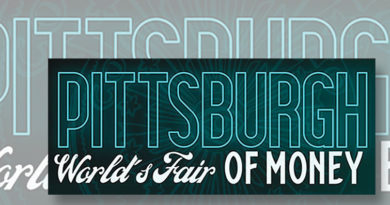